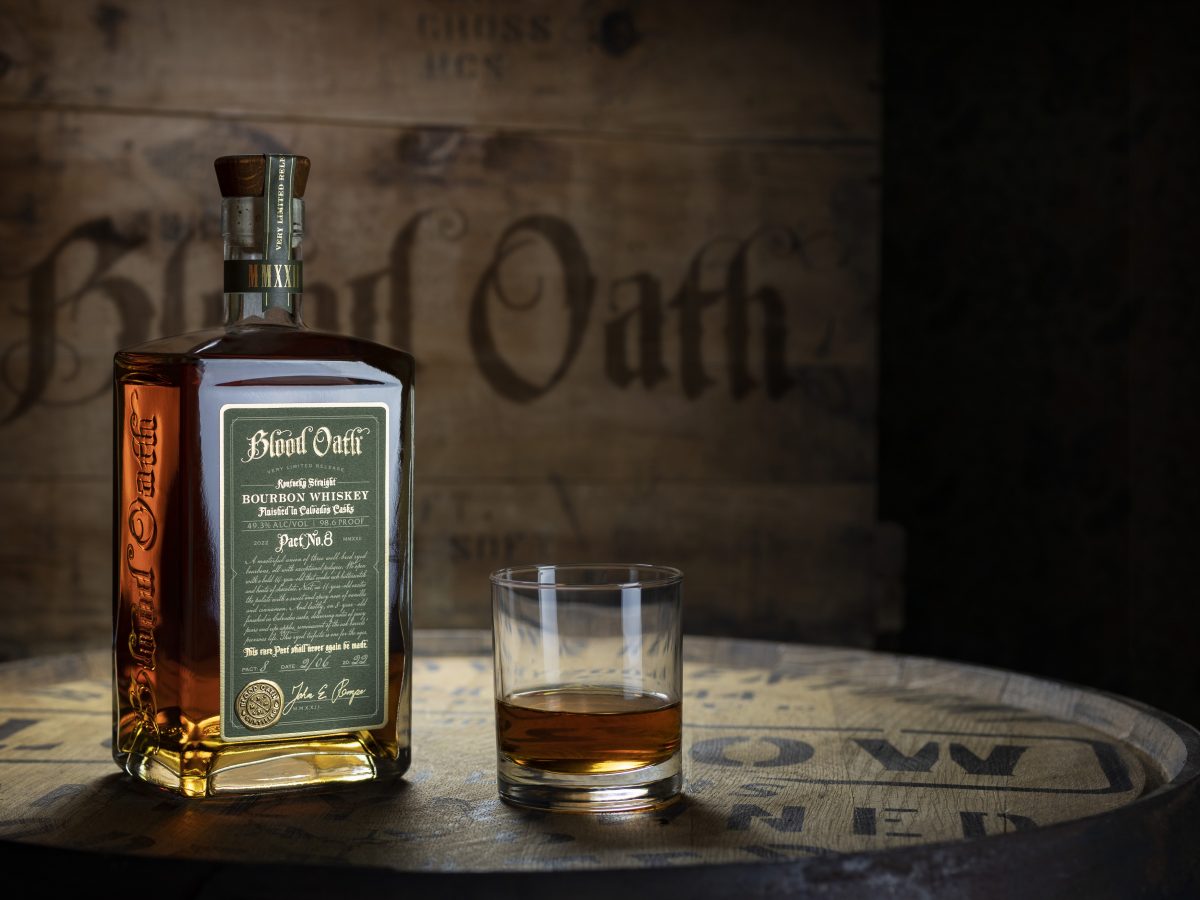 There are two types of bourbon. There’s bourbon whisky and then there’s Blood Oath, the ultra-premium bourbon released in limited quantities once a year by Lux Row Distillers.

In 2015 Blood Oath debuted as the signature brand of Lux Row’s Master Distiller, John Rempe. From the very first Pact, Blood Oath has been a sought-after feature for bourbon enthusiasts and collectors alike.

Every Blood Oath release is sealed with a custom natural cork and is packaged in a fire-branded wooden box. The bourbon bottle is hand-labeled and includes the creation date, origin story, Blood Oath seal, and Rempe’s signature.

For Rempe, each Pact is a creative enterprise that allows him to experiment and explore what makes bourbon the alluring elixir it is. With each release, he elevates the previous Pact to create his most sublime bourbon to date.

What Makes Pact No. 8 Special?

Pact No. 8 combines three extra-aged ryed bourbons (aged 14, 11, and 8 years), with one of the ryed bourbons finishing in French Calvados Casks. The result: a well-balanced, bourbon with complex flavor notes of ripe apple and juicy pear. 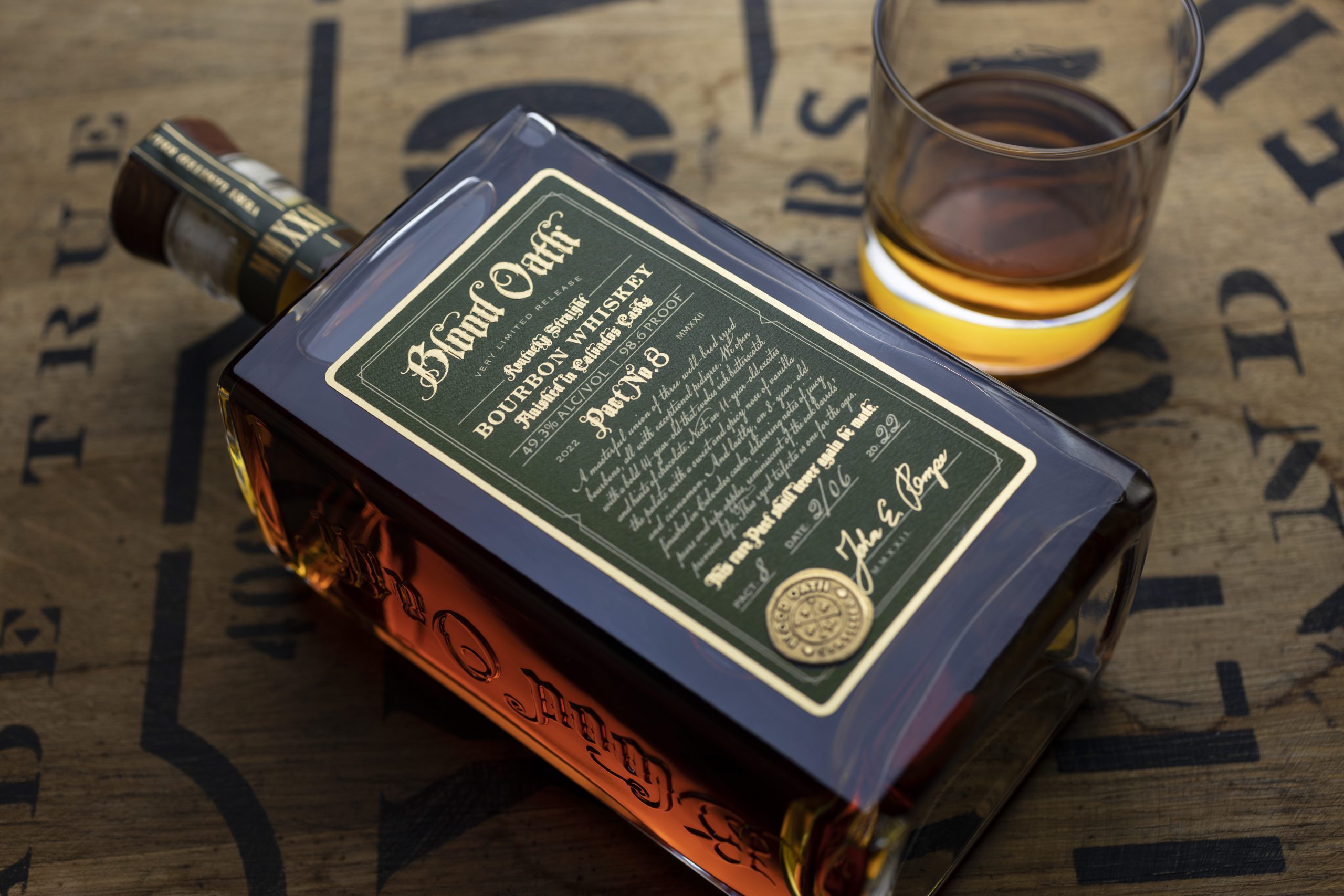 Calvados is an apple or pear brandy that can only be produced in Normandy region of France. Calvados has a predominantly fruity profile with tastes of apple and pear, and notes of baking spices, sweet pastries, and apricot. The casks add a slight nose of apple and hints of vanilla and cinnamon that create a previously unimagined complex sweetness.

How do you handle demand?
We’ve got retailers screaming for more cases, and now that our bourbons are available in Europe, the demand is even higher. Every year, the release is sold before we bottle it, and we’re forced to ration it out. We have increased the number of cases slightly over the years, but it’s still a limited edition, and we intend to keep it that way. It has evolved into a collector’s item for a lucky few.

How Does Pact No. 8 Fit Into the History of Blood Oath?

Pact No. 1 was the first release. It was not finished in a barrel, instead, John had three outstanding Kentucky bourbons he blended together to form a deliciously balanced end result.

Pact No. 2 was when things started to get more creative. This Pact was finished in port barrels, which gave the bourbon fruity and herbal notes.

Pact No. 3 was a partnership with Swanson Vineyards in Napa Valley. The blend was aged in their Cabernet Sauvignon barrels. It gave the bourbon a subtle, fruity, Cabernet-wine quality, with an earthy, French oak note.

Pact No. 4 had a toasted oak finish. This was when John started to get creative. He used barrels from the Lux Row sibling brand, Rebel 10-Year Single Barrel. Then they were sent to a cooperage where they disassembled the barrels, scraped off the char, reassembled them, and put a deep toast on the inside. This process brought out strong dark chocolate and caramel notes.

Pact No. 5, like Pact No. 1, was a blend of three extra-aged bourbons. However, this time one of the bourbons was finished for six months in Caribbean rum casks. It brought out all sorts of flavors, from dark fruit to molasses to prune and plum.

Pact No. 6 had a lingering spice finish. It was three Ryed Bourbons aged 14, 8, and 7 years and then finished in Cognac barrels. This created a palate of caramel, spiced raisins, and dark berries. For its high proof, it was surprisingly smooth, with the lasting finish of caramel and oak.

Pact No. 7 is an exceptional blend that has an aroma of caramel, oak, and subtle hints of honey. Its palate is smooth and earthy with a warm finish that combines apricots, honey, and peaches.

Three well-bred rare ryed bourbons, one that was finished in a Sauternes wine cask that was imported from the Bordeaux region of France were masterfully blended to create a strikingly complex balance of sweetness and spice.

Pact No. 8 is a masterful blend of three extra-aged ryed bourbons, a 14-year, 11-year, and 8-year finished in Calvados casks. This combination has a slight apple on the nose with hints of vanilla and cinnamon. The flavor notes are of ripe apples, juicy pears, butterscotch, and subtle hints of chocolate.

How to Get Your Hands on Blood Oath Pact No. 8

Blood Oath Pact No. 8 will be available in some retail stores, though dates vary according to shipping and distribution.

One surefire way to get Blood Oath Pact No. 8 is by visiting the Lux Row Distillers gift shop. We recommend calling ahead to confirm it’s in stock.