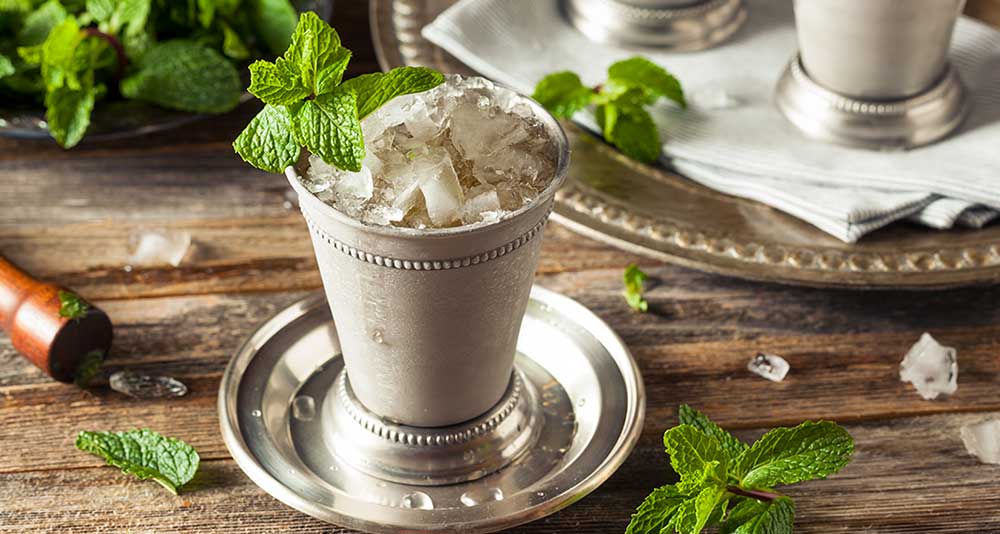 Whether you love the Kentucky Derby for the people-watching (those hats!) or the horse racing, one thing is certain: The derby’s signature mint julep drink is the best tradition of all.

The mint julep is a combination of bourbon, mint, sugar, and water, served over heaps of crushed ice in a signature silver or pewter cup. Although the race itself may last only a couple of minutes, derby fans keep sipping their mint juleps long into the afternoon.

Curious about the history of this favorite Southern libation? Then read on.

The Start
The julep first got its start as a medicinal concoction used to settle the stomach. As a cocktail, it blossomed in the American South in the late 1700s, with a decidedly elite air, because not everyone had access to ice nor the silver or pewter cup in which the drink is served.

The Spirit
Some recipes allow for different whiskeys, and there’s also a julep cousin known as a brandy smash that partners brandy with mint. But when it comes to the julep, bourbon is the liquor of choice, and rightfully so.

Something magical takes place in the chemistry between fresh spearmint leaves and the aged intensity of a bourbon like Rebel Yell or Ezra Brooks. Then, you have the sweetness of the sugar, which helps the two flavors harmonize, creating a drink that’s both refreshing and profound.

The Cup
Part of the joy of sipping a mint julep revolves around the cup. Not only is there a tactile pleasure in the subtle cone shape and polished sterling or pewter materials, but the metal is ideal for showcasing that frosty exterior that’s so desirable.

The cups were in such high demand, in fact, that patrons took to stealing the cups during the derby, so Churchill Downs issued cups for sale. Naturally, they became instant collectibles.

Gently muddle mint leaves and simple syrup in the bottom of a julep cup, then add the bourbon and pack with ice. Swirl it all around in the cup so that it gets frosty, then add more ice to the top. Garnish with the mint sprig.