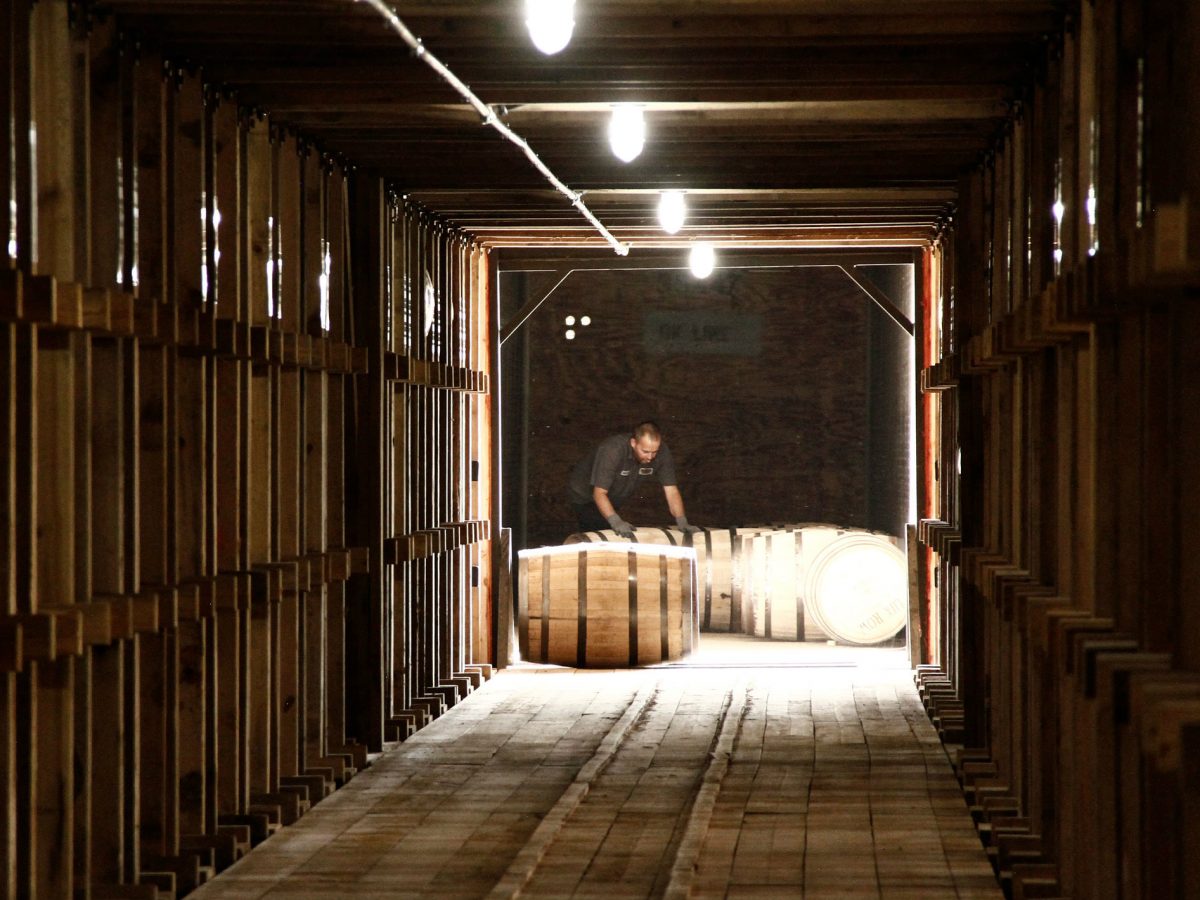 Bourbon isn’t bourbon until it’s been aged in barrels, both by tradition and by law. It needs a protected, waterproof vessel to come into its own, and wooden barrels are just the ticket.

Bourbon must be aged in barrels that are charred, and ISC has a patented technology that monitors that delicate process.

“We can keep track of the time the barrel has been toasting and the temperature,” he says. “With different temperatures, you’ll get different flavors that will come out of that barrel.”

He compares it to cooking beef.

Charring a barrel is not as simple as lighting it on fire. “We’re putting the barrel over a hot fire, but it’s not catching on fire,” he says. “It’s like you’re toasting bread.”

And not everyone likes their toast done the same way. You might like your toast golden brown, or maybe crisp and dark.

“One [distiller] might want to bring out characteristics like butterscotch, while another wants it toasted at a higher temperature, where it almost catches on fire, to get a smoky profile,” he says.

Also by law, bourbon must be aged in new American white oak charred barrels. When you look at a map, it makes total sense: White oak is grown through the Appalachian Mountains, the Ohio River Valley, and the Ozarks. It’s wood that’s indigenous to Kentucky, the home of bourbon.

“We work with thousands of small companies,” LaHue says. “They typically have a two- or three-man team. It’s a lot of pops and sons cutting logs.”

They get only a couple of barrels per tree, depending on whether the wood has knots. Knots are bad. Knots make barrels leak.

The logs go to one of ISC’s stave mills, where they get cut into pieces. The long pieces for the sides are called the staves; shorter pieces, called headings, are for the top.

The wood is dried to lower the moisture content. Then assembly begins: trimming the ends, planing the wood until smooth, warming up the barrel and steaming it to bend it into its curvy shape.

“We don’t use any adhesive or glue,” he says. “It’s all pressured and bound by metal rings. It’s going to come into contact with up to 125 proof alcohol, so any glue or adhesive would dissolve.”

Lux Row’s barrels are manufactured at ISC’s cooperage in Kentucky, 30 minutes from the distillery. ISC works with Lux Row to determine what kind of barrel they want and how intense the char level should be.

Charring opens up the wood, allowing the spirit to seep in and absorb those organic compounds that give bourbon the flavors we know and love: caramel, vanilla, toffee, coconut, honey, nuttiness, spice, black tea.

“We try to keep it simple: We’re in the flavoring business,” LaHue says. “We make barrels that add flavor to our customers’ products.”

“We work with Luxco’s master distiller, John Rempe, to define what type of flavor he’s looking for,” LaHue says. “We send him samples so he can do barrel sampling and find out what he likes. I think of it as us providing the spices, and he’s the chef.”

Employing another bit of technology, ISC relies on a bar code system that tells them everything there is to know about each log. They can scan to find out where the wood originated, when the barrel was made, who toasted it, and at what toast level.

But technology only takes you so far.

“There’s a lot of innovation out there, but the companies we work with that have been around a long time know that it takes four years to make a really good bourbon,” he says. “You cannot cheat Father Time when it comes to maturing goods that go into barrels.”